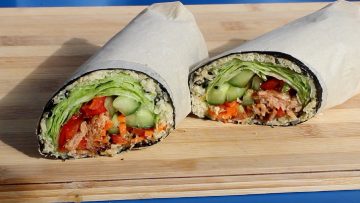 If you love sushi, you will love this ketogenic sushi burrito which you can easily make at home, and customize this tasty sushirrito-inspired version. The how-to video shows you a step by step way to make my keto teriyaki salmon sushi burrito – with an oven roasted salmon fillet seasoned with my keto teriyaki sauce and glaze, or make it with canned wild caught salmon. There is no cheese, so the sushi burrito is dairy free. The same ingredients, such as the cauliflower rice seasoned with traditional Japanese tobiko (seasoned vinegar for sushi), fresh vegetables such as lettuce, carrots and bell peppers/capsicum used to make this sushi roll can also be used with fresh wild caught light tuna, which I believe is healthier than albacore tuna, or pork belly, or with teriyaki chicken strips. After making the Keto Sushi Burrito Salmon Teriyaki Roll, wrap in parchment paper and cut in half, for a better than restaurant meal. Enjoy!