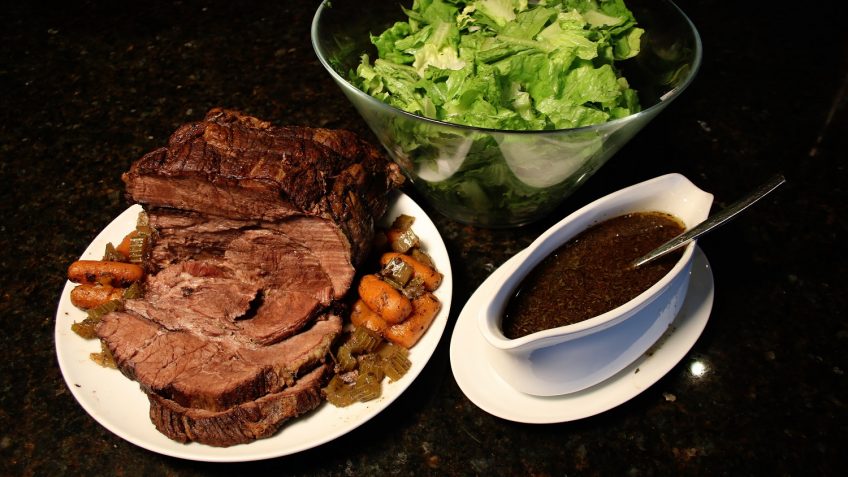 I have chosen to use baby carrots because it is less work, but you can use a full carrot which you peel and then cut into relatively large pieces – you do not want the carrot to dissolve into the gravy. This gives you the option of serving the carrots or leaving them off by picking them out of the serving.

Sear the meat until it has a crisp brown surface. You should not try to turn the meat until it is well seared on that side. You will know when to turn the roast because the surface of the meat will release easily – and not stick. If it is sticking, let it sear a bit longer on that side. It depends on how hot your heat is but it will take approximately 2- 3 minutes per side. Browning the outside then slow cooking is also called braising.

Even though you will be using the slow cooker, searing helps to enhance the flavor of the meat and if you do not pre-sear the roast, the end meat will look gray and more like a bland boiled piece of meat. And this bit of extra effort will give a far superior slow cooker roast, that will taste better and also looks much better so please do not skip this step.

With regards to the carrots, if you do not want the carbs, just do not take any and leave them for someone else, or remove them all together. They were primarily added for the flavor, which they released already.

ABOUT SLOW COOKERS, my opinion and two cents-worth

Just a quick word on slow cookers: you do not need an expensive, brand name machine. I have found that I only use my slow cooker on its basic settings of Low or High. And adjust the time I want. What you look for in a slow cooker is overall reliability, and even heating through the bottom and sides of the liner. We bought one for our son that cost in the mid-$30 range, and it is a good basic model that does everything you will need to make your meals.